The Art of the Social Sell

What you need to know about the art of the social sell.

Social selling is a hot topic at the moment and it’s become a powerful tool for salespeople worldwide. In fact, 78% of salespeople who utilise social selling will outsell their peers. So, if you’re working in the sales industry, you need to be incorporating social selling into your approach. If you’re not, you’re doing it wrong.

What is social selling?

Social selling is the process of using social media to develop relationships with current and prospective customers. It’s about creating a personal brand, sharing content that’s relevant to your target audience, and engaging with them like an actual human being. Sounds easy, right? You’d be surprised. In the overpopulated social media marketing world - where auto DMs have become the norm and spam accounts have taken over - it’s important to actually make an impact on your customers rather than blending into the ‘noise’.

The truth is that you may actually be utilising a social selling approach without even realising it, albeit perhaps not very well. Of those salespeople surveyed in Social Media and Sales Quota report, 54% could track their social media usage back to at least one closed deal. Think about that guy you pitched to the other week; he connected with you on LinkedIn, right? Well then, you’re already in the game - whether you like it or not.

This passive approach won’t get you anywhere, however; it’s like waiting on your phone to start hopping with inbound leads without actually marketing your product. When it comes to social selling, you’re responsible for both the marketing and selling of your product/service and social media is your tool for doing so. Oh, and a personality helps too.

The tips below will help you to master the art of social selling and bang your sales figures out of the water. Consider these a freebie, but the drinks are on you when your commission rolls in.

It may come as a surprise to the digital natives out there, or even to those who grew up with landlines and fax machines, but if truth be told very little has changed in the art of selling. You still need to market, advertise, network and hustle. You still need to build relationships. You still need to be able to talk the talk, spot an opportunity and close the sale.

The difference is that these conversations have all moved online.

The terms of engagement have changed but the game is the same. It’s much quicker now. Everything happens in realtime now. And the audience has grown. You now have a world of opportunity. Literally. Global audiences of like minded people, all within a LinkedIn request or a Twitter follow away from starting a relationship where everyone wins.

One other thing hasn’t changed. And it’s a biggie. It’s something as old as the hills, but it wasn’t until 1937 that Dale Carnegie first brought it to the attention of the world. In a word, listen. Listen to who you’re talking to, listen to what they’re saying and encourage them to open up more and more. Don’t take your foot off the pedal and even more importantly, don’t steer off topic.

You want conversations, even the trivial ice breakers, to be about them. Their holidays, their weekend plans, what they had for breakfast...whatever it happens to be, whatever they bring up in conversation, just pepper them with encouragement to talk about themselves.

Eventually they’ll get around to talking about their problems, their work hassles, the stuff that keeps them awake at night and the very problem that your products or services were designed to solve. Bingo. You just got yourself a social sell.

Ok, that was a quick cut to the chase. I’ve oversimplified to prove a point. In reality, there’s more to it. First of all you need to generate leads and build on the relationship. How to do that? Well you need to stand out, be trustworthy, raise your profile across social channels and become a thought leader. To do this, you need to curate, create and share relevant and engaging content.

Once you have that production line of content generating leads, you need to be proactive and develop those relationships.

It seems like the ‘be authentic, be you’ mantra been done to death lately, and it’s getting a bit cheesy at this stage, but the problem is that more people are still talking about it than actually doing it. Unfortunately, the social media world is jam-packed with promotional tweets and bot driven accounts, and it’s essential to set yourself apart from that.

Sure, a little social media automation is fine - but you have to pepper it with some personality if you want to see any real engagement. Real engagement builds loyalty and trust, which then builds followers, and ultimately - sales. The saying ‘people buy from people they trust’ might be dated but it isn’t outdated, and it’s still as true as ever.

The reality is that your social media profiles are an extension of you, and you’re an extension of your business. If people don’t like you they won’t buy from you or your company. If you need an example, just check out Joel Gascoigne’s Twitter feed. Joel is the COO over at Buffer and this company’s entire success pretty much sums up social selling in a nutshell.

Or maybe you just need a mentor? 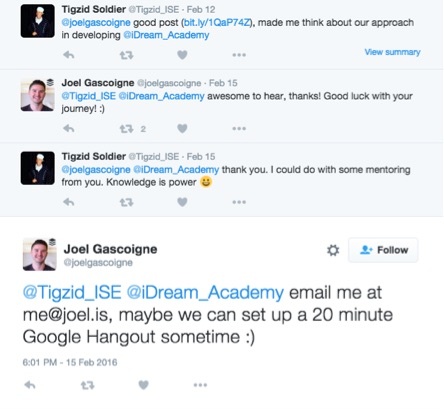 Pretty cool, eh? Through a mix of humanising and business tweets, genuine engagement and being a proactive problem solver; that’s the art of the social sell in action.

Findings from Forrester Research have shown that companies who focus on lead nurturing will generate 50% more sales at a 33% lower cost. The idea is to focus on forging relationships rather than transactions. Once you’ve established yourself as a credible, knowledgeable, and trustworthy representative, who is actually interested in their customers -  the sales will follow.

This means identifying key influencers and building relationships with them, as well as with your regular audience. It means taking an interest in your followers and having real conversations with them, rather than simply bombarding them with promos every hour of the day.

By building connections with your online audience, you can convert cold leads into warm leads within minutes, and guess what those warm leads turn into? Sales.

Hopefully you now see the enormous potential and benefits of social selling. It’s how the B2B world works whether you like it or not. So you need to think of your own strategies for success and how to create a content marketing plan that will help you stand out from the crowd.

Don’t worry, we’ve got your back covered. Download our Content Creation Masterclass below and in no time at all, you’ll be a lean, mean, lead generating machine and you’ll be well down the road of mastering the art of the social sell.